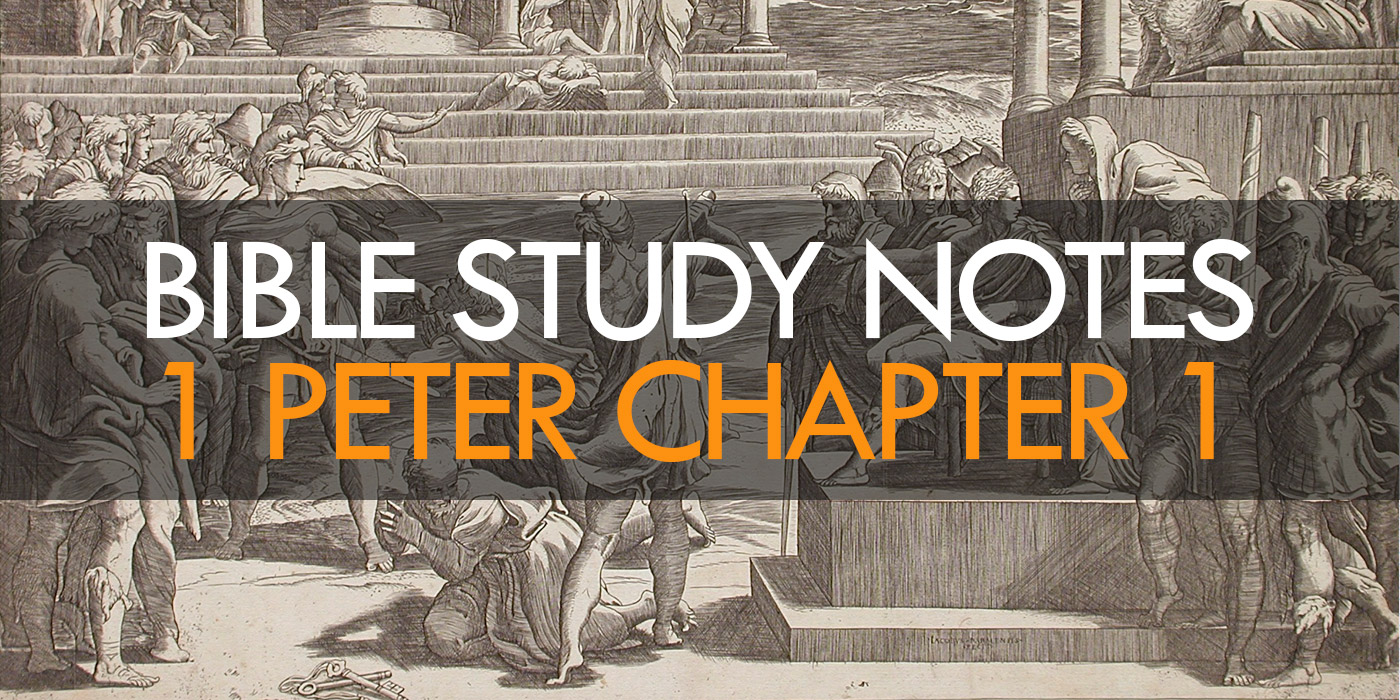 1-2: Peter was writing to all the persecuted and divided Christians throughout the regions of Asia Minor, (Pontus, Galatia, Cappadocia, Asia, and Bithynia), what is now Turkey. It was written by Peter imprisoned likely in Rome between A.D. 60 and A.D 64.

3-5: Even though he is imprisoned, has been beaten, the people he is writing to have been being persecuted, he starts his letter with praising God for his mercy and living hope because of the resurrection and salvation given through Jesus. He explains that the inheritance Christians have into the Kingdom of God is everlasting that nothing can spoil or take away. The inheritance and our salvation are shielded by God. This is to realign the focus of all the Christians and encourage them.

6-9: After Peter realigns their focus and gives them the encouragement, he reminds them that they are to rejoice in it, even though they are suffering. He compares the suffering to a little while, or a small amount of time, and it is nothing compared to the eternal glory of that of which they are bringing to the world. These first century Christians were literally setting the example and proving the validity of Jesus because of their suffering and enabling God’s plan and redemptive work to be passed down through all generations. Without these Christians who suffered, memorized, keeping, and sharing the Gospel and Word of God, the church as we know it may not exist. God used them to fulfill, and continues to through current believers, His plan. The fact that these early Christians were keeping their faith through all the persecution and suffering, was a testament to Jesus and the truth of God. The unbelievers were left only to see that their faith was genuine, pure and selfless. This was their greatest testimony to the unbelievers and obviously lead many more to accept Jesus because of it. Peter explains it as the “goal of their faith and salvation of their souls”.

10-12: Peter goes on to remind them of the prophets that declared long ago what would happen, the entrance of Jesus into the world, His suffering and death, and the glory following His resurrection. He implies that they are fortunate because what the prophets and even angels longed to see and experience, they are taking part of and living in, the revelation, (and indwelling), of the Holy Spirit sent from Heaven. I believe he is referring to the Pentecost.

13-16: Peter commands Christians to keep our minds “alert and sober”, and to “set our hope on the grace to be brought to you when Jesus Christ is revealed at his coming”. This is telling them and us to keep our minds and attitudes ready, diligent, and holy. The glory and grace that will be given to Christians is promised by God and will be given, (to us), even until the day that Jesus comes back to this world as He promises. His glory, grace and power are for our sustenance. Whatever we do, we should do it with God in mind. Peter then implores Christians to not slide back into their sinful ways before they accepted Jesus and not know the truth of Jesus and lived in ignorant sin. We are called to be holy, like God is holy. Though we can never reach perfect holiness like God, we must constantly strive to be like Him and progress in our walk with Jesus. We should do well to imitate God and His qualities to the best or our abilities.

17: Peter calls the believers “foreigners” or “strangers”. I think this is referring to both foreigners of the land they were in and foreigners here on Earth in general. It is implied that this is not our forever home, we are only here for a while. He then reminds the Christians to live out their lives in reverent fear of God because he is an impartial judge of man. Reverent fear is a fear that is based on respect and love. Knowing the awesome power of God should make us respect Him. Knowing that He is the ultimate judge and there is consequences for sin should make us fearful of being in the wrath of God, much like a child in disobedience to his parent. However, God’s love and patience for us is perfect and never ending, where a human’s is not. Having respect and the right fear of God as Psalm 111:10 tells us that the fear of God is the beginning of all wisdom. It is for our benefit and the benefit of others to fear God and live according to HIS instruction and teaching. Needless to say, the biggest benefit is a life that glorifies God and makes God pleased. This should be a believer’s number one desire.

18-21: Peter here emphasizes again to Christians what a price was paid for us to have our salvation. It was the perfect sacrifice of God Himself incarnate, Jesus. Jesus is “much more precious than silver or gold”. Through Jesus, and only through Jesus do we get access to God. This is something to consider each and every day, and never take lightly. Each and every day, Jesus has to step in and arbitrate for our sins. I think too many people see the act on the cross as something that happened long ago, but do not realize that Jesus continues to pay our debt every time we sin. Someone, namely Jesus, has to take that guilt and have the Father remove it “as far as the east is from the west”. Verse 21 confirms our hope in Jesus, because it was God Himself who raised Jesus from the dead and glorified Him, which is the promise that we as Christians have who believe and have accepted Christ as our savior alone and live according to the will of God to the best of our abilities.

22-25: This chapter ends on an extremely high note. It is because we have been purified through Jesus, the truth, we are called to love each other. We have been made “new creatures” and from a seed that is imperishable that lives inside each Christian. This seed is the Holy Spirit indwelling in our souls. Nothing can remove the Holy Spirit from us, nothing will ever “kill” God, He is permanent, perfect, never changes, and all powerful. He is our foundation, our refuge, and His Word is living, real, and we are to live by it and obey it, and be eternally thankful for it. We know that our mortal bodies will someday die, but because of the truth of God’s Word, because of our salvation through Christ, we too will rise again. I believe Peter is emphasizing this in verse 25 with, “This is the word that was preached to you”. We are to know God’s Word, believe in it, depend on it, and live it out.

This chapter is packed with wisdom and reminders that we must apply every day. It is a great reminder of the cost the early Christians paid to further the Gospel so that you and I could have access to it today. It is also a great reminder of the ultimate cost for our salvation, Jesus, that should be our focus, even in a persecuted life, and living in the Word of God.

This chapter and the entire book of Peter makes me think of how I’ve heard many modern Christians today state that “we must be in the end times because of Christian persecution around the world”, or “the world has never been worse”. I’m not going to debate whether we are in the end times or not, nor do I think we should. We should live our lives like God could call us back even now, to be ready. My point is that, it has been just as bad, and probably worse. This is an excerpt from my study Bible about what the Christians were experiencing when Peter wrote to them.

In the Roman empire, Christians were often considered anti-social and a threat to the unity of the empire.

The most well-known persecutor of Christians was the infamous emperor Nero, who probably attached them to deflect public criticism against himself. A fire had devastated Rome in July, A.D. 64. Word on the street was that Nero had ordered his servants to start the fire to clear the way for his ambitious building projects. The citizens of Rome were outraged. Even if he hadn’t started the fire, they believed he wasn’t appropriately concerned by it. A rumor spread that Nero played music while Rome burned.

Nero couldn’t squelch the criticism. So the Christians, already a misunderstood minority, became his scapegoat. He made it a crime to believe in Christ, denouncing believers as atheists (because they renounced Roman religion). He fueled rumors about their private (seemingly secret) meetings, going so far as to say that the Lord’s Supper was cannibalism.

Nero tortured Christians in barbaric spectacles. Some were crucified. Others were sewn into animal skins and torn apart by wild dogs. Still others were covered with tar, suspended on poles and set on fire as lights for Nero’s evening festivities. Zondervan Quest Study Bible

Thinking about the sacrifice of early Christians, the suffering of some Christians currently, and the potential suffering that might be something we see or experience ourselves, is nothing short of horrifying. However, Peter’s letter reminds us of the long term goals and how to live in the face of opposition.

Please leave your comments and thoughts! Your comments help to motivate me and keep me in the Word of God. I am also blessed whenever someone is blessed or finds any of my articles helpful.

Below is a great video that summarizes the entire book of 1 Peter by a group called The Bible Project.